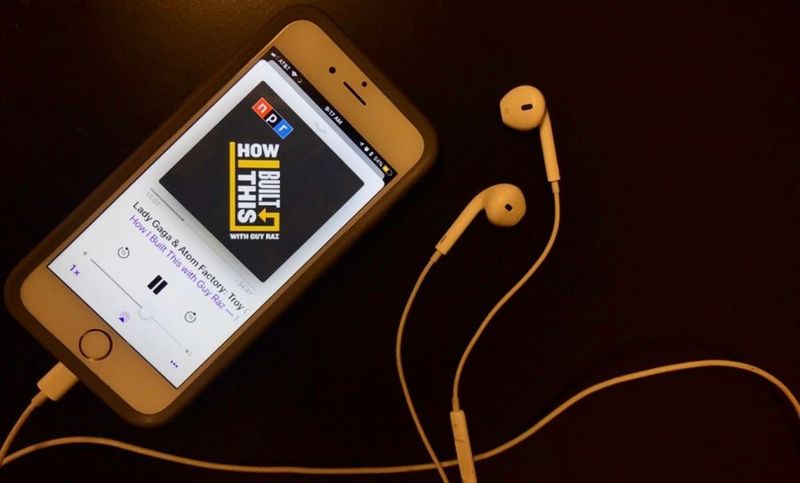 Tales of ambition, innovation, trials and triumph — that's what the podcast, How I Built This, focuses on. Guy Raz, the host of the series, interviews high-profile entrepreneurs and gives an inside look into the journeys that led to the creation of the world's best known companies. PeerSource put together a list of five inspiring episodes that you need to add to your list this month.

Who is Manoj Bhargava?

Manoj Bhargava, the founder of 5-Hour Energy, joined Guy Raz for an interview in March 2017. A recent documentary created about Bhargava, Billions in Change, reports that his net worth exceeds $4 billion.

You do not have to be an expert to build something incredible. “People always ask ‘Did you have a science background? Did you have a background in nutrition?’ No — that only messes you up further. It doesn’t really help you at all. Most inventions have been made by people who didn’t have a background in whatever they were inventing. If you look throughout history, the great stuff was made by people who did not follow the rules of the experts. Experts are great for telling you what you shouldn’t do and for that, they’re useful. But for what you SHOULD do — they don’t have a clue.” -Manoj Bhargava

Fall and get back up again. “I fall so many times, I’ve got pavement marks on my face. So what? Just get up again and do it again. And I went through probably 20 different products — big failures, little failures. If you can’t do that, then you should best just go work at a large company.” -Manoj Bhargava

There are three things that every aspiring entrepreneur needs to know. “First, use your common sense. Do not use MBA speak. Second, you have to be totally determined. I hate the word passionate because you get hit in the face a few times – passion seems to fade. Determination means basically your face hits the floor 20 times, you get up 21 times. The third thing you need is a sense of urgency. Do it now. Don’t wait. Don’t delay. If you have those three things, those are all you need.” -Manoj Bhargava

You can check out the How I Built This with Guy Raz podcast episode on 5-Hour Energy’s Manoj Bhargava here.

Who is Yvon Chouinard?

Yvon Chouinard started Patagonia is 1973. He joined Guy Raz for an interview in December 2017.

Always ask yourself, “How could this be better?” “I never intended to start a business. It's just — I just have this knack that every time I look at a product, I look at it and I think . . . I can make something better than that. It could be better. So every time we went climbing, we'd come back with ideas on how to improve the climbing gear, which was very crude in those days. And so, you know, I became a blacksmith. I taught myself blacksmithing so that I could make some of the climbing hardware that I thought would be better than what's available.” -Yvon Chouinard

Hire great employees and leave them alone. “A lot of companies, they're top-down management. And it takes a tremendous amount of effort to run those. So what we decided to do is just hire motivated, young, independent people and leave them alone. And, I mean, I wrote a book called Let My People Go Surfing. We have a policy that when the surf comes up, drop work and you go surfing. I don't care when you work as long as the job gets done. I've had other companies come to me and say, ‘Oh, I love that idea, I think I'll institute it in my company.’ I say forget it. You'll fail because you have to start with the very first person you hire.” -Yvon Chouinard

Entrepreneurs are experts at breaking the rules. “If you want to be successful in business, you don't go up against Coca-Cola and these big companies. They'll kill you. You just do it differently. You figure out something that no one else has thought about and you do it in a totally different way. And so breaking the rules, you have to be creative. And that's the fun part of business, actually. I love breaking the rules.” -Yvon Chouinard

You can check out the How I Built This with Guy Raz podcast episode on Patagonia’s Yvon Chouinard here.

Who is Cathy Hughes?

Cathy Hughes, founder of Radio One, joined Guy Raz in September 2016. “Hughes has the distinction of being the first African American woman to head a media company publicly traded on the U.S. Stock Exchange,” The History Makers reports.

Dream so big that people think you are crazy. “I wanted to be the first African American to have a syndicated radio show. I’ve had that desire since I was eight, nine, ten years old . . . Everyone thought at that time there was something wrong with me. I mean, there are no black people in radio, particularly no black women because, again, remember we are isolated in the middle of the United States in the 1950s? So, they thought I had a pipedream. My nuns at my school described it as 'delusions of grandeur' and told my mother she should perhaps seek counseling for me because I had this vision of being on the radio and people hearing me from coast to coast.” -Cathy Hughes

You have to see the future in your mind’s eye. “If you think ‘Oh, it’s overwhelming. I’ve got all this debt. I can’t sell anything. I’m working 18-20 hours a day.’ Then, it’s too hard. You can’t do it. But, when you know that the day is going to arrive when you are going to have enough money to pay everyone — that’s what you have to see in your mind’s eye. That's what you have to believe. And I saw that. I knew it. I could feel it. And that is when I was in the sleeping bag, cooking on a hot plate, and washing up in the public bathroom in the radio station.” -Cathy Hughes

Cathy Hughes is referring to the fact that actually lived in the radio station when she first started out.

Who are Neil Blumenthal and Dave Gilboa?

Neil Blumenthal, Dave Gilboa, Andy Hunt and Jeff Raider founded Warby Parker. Neil Blumenthal and Dave Gilboa were guests on How I Built This to discuss the origins of the company. In the podcast, Guy Raz tells listeners, “The company actually partners with the nonprofit where Neil used to work, VisionSpring, to bring eyeglasses to people around the world who don't have access to them.”

_ Do not be discouraged by where you start._ “We were working out of our apartments as full-time students. Our customer service line was a Google Voice number that we set up. When someone would call, it would simultaneously ring all four founders' cell phones.” -Dave Gilboa

Treat customers fairly from the beginning. “You know, I think from the get-go, we wanted to create a business to have a positive impact on the world. And part of that is treating customers fairly. It's treating them fairly when it comes to price. It's treating them fairly when they call up and complain and to apologize and explain when we make mistakes. And that's something that we did from the very beginning.” -Dave Gilboa

Timing is everything. “We were really lucky to be exposed to our marketing professor that helped us think through pricing. We had created goodwill by being friendly and doing well in his class — that he was willing to dedicate time to us. So I think there's a million examples of that or our friends calling in favors on our behalf. One of the things that we were just straight up lucky on is timing, right? Timing is everything. You know, coming off the financial crisis, the public was looking for ways to save money. And I think a brand like ours resonated even more.” -Neil Blumenthal

Invest in the important things. “We basically, to start the business, only invested in three things — our initial inventory, our website and some PR, knowing that you only have one shot to sort of launch a brand.” -Neil Blumenthal

You can check out the How I Built This with Guy Raz podcast episode on Warby Parker’s Neil Blumenthal and Dave Gilboa here.

Who is Troy Carter?

_ Remember where you came from and know where you are going._ “You can't fall off the floor. And I was on the floor, nowhere to go, right? And my mom . . . she was a single mom. We grew up where a lot of times, we had to choose between whether we were going to have a phone line in the house or electricity. And I remember us being on the bed with a penny bank. And it was a bronze penny bank shaped like a pig. And she would stick a butter knife into the slot to get the coins to come out. And we would divide the coins up to get — you know, so me and my brother would have bus fare to get to school. So we grew up tough.” -Troy Carter

Mentors can change your life. “I had a fifth-grade teacher named Ms. Moore. And I was always the littlest guy in the class . . . But she used to call me the ‘big guy.’ She made me feel like I was 6-foot-5 . . . It was something that she did psychologically that really, really made me feel, not only did I belong, but that I was special. So, sometimes I'll go into rooms where this person has a lot more experience than me. They're much smarter than I am. But I know what I know. And I think I bring a unique point of view to the table, just with different experiences. And I'm confident in that point of view.” -Troy Carter

Your past experiences can help you be a better negotiator. “When you have to negotiate for survival and you have to know how to read rooms and you have to know who the bad guys in the rooms are, who has the gun in their pocket, who's just going to brandish it and who's going to actually pull the trigger — I think that's just a natural instinct that comes with coming from where I come from. So being able to take that tool into negotiations on reading people and reading rooms and reading circumstances I think is very, very important. Then, also, knowing what's important for that person on the other side of the table and what's important for the client.” -Troy Carter

PreviousWhat is Shadow Banning and Why is Being Twitter Accused of Doing It?
next10 Tips for the Transition from College to the Workforce